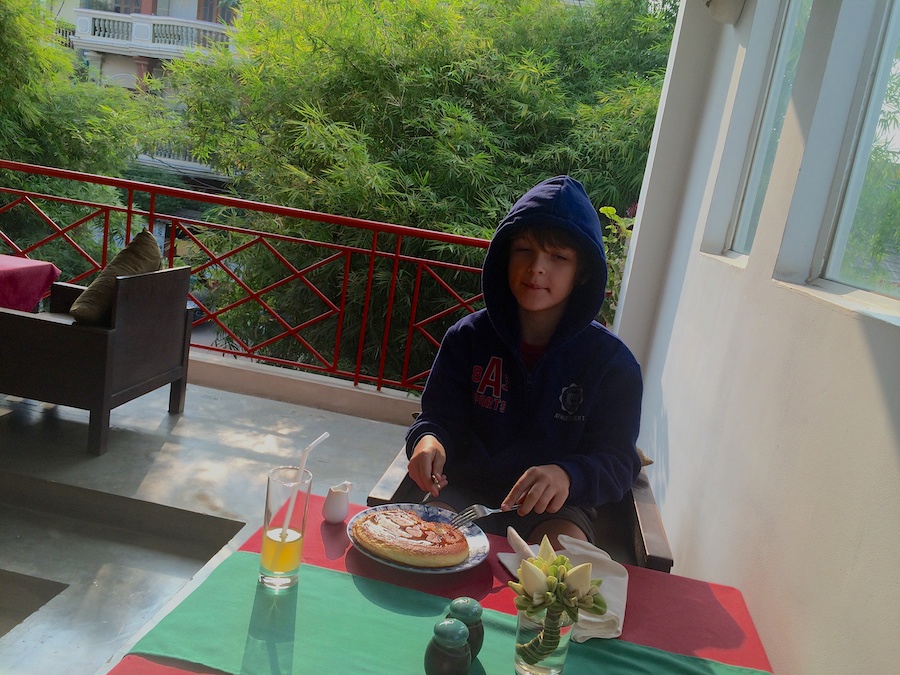 as you can see, its a bit chilly in the mornings in siem reap, even allowing for us coming out of our wet season and into their dry, there is no doubt its rather cool first up.

we have spent a couple of days getting familiar with siem reap, being somewhere that there are so many tourists is a bit of a shock after malaysia, and it does detract from the experience somewhat.

the food is good, although its proving harder than I expected to find good local food – mainly due to tourists meaning that there are many more western style restaurants than i expected.

as you can see from the tarantula video, there are still opportunities for authentic street food!

today we did angkor wat, we hired a guide,  he had a car with a driver and he was certainly informed and passionate in his guiding, the numbers alone are impressive, 30 million tons of sandstone, floated on bamboo rafts down a canal from the mountain where it was mined, 8000 elephants in the construction and a 100,000 khmer labourers to build it – all done over 900 years ago.

the highlight for me was the little cambodian restaurant that our guide, Bun took us to after the tour! we asked him to take us somewhere to have a traditional cambodian meal and the fact that the restaurant is only 100m from out hotel is an added bonus!

we had an amazing omelette, a yummy sour soup with fish, a great pork and pumkin dish, and a sweet and sour vegetables.

carvings in the sandstone….

one of the towers

Sal, our driver and Bun

close up of the yummy lunch

last night we had the amazing experience of going to the local cambodian circus, called phare.

it was an incredible blend of culture, theatre, story telling, dance, acrobatics, juggling and music – with amazing energy and intensity.

the circus schools takes disadvantaged young kids from cambodia and teaches them to become performers so it has an important social as well as cultural function. we had vip seats in the centre, front row – when the flaming skipping rope slipped out of their hands , as you will see in the video, it nearly hit us and kai reckoned “we were nearly killed!”. kai had an absolute ball and along with Lego land I think it is a highlight of his travels so far.