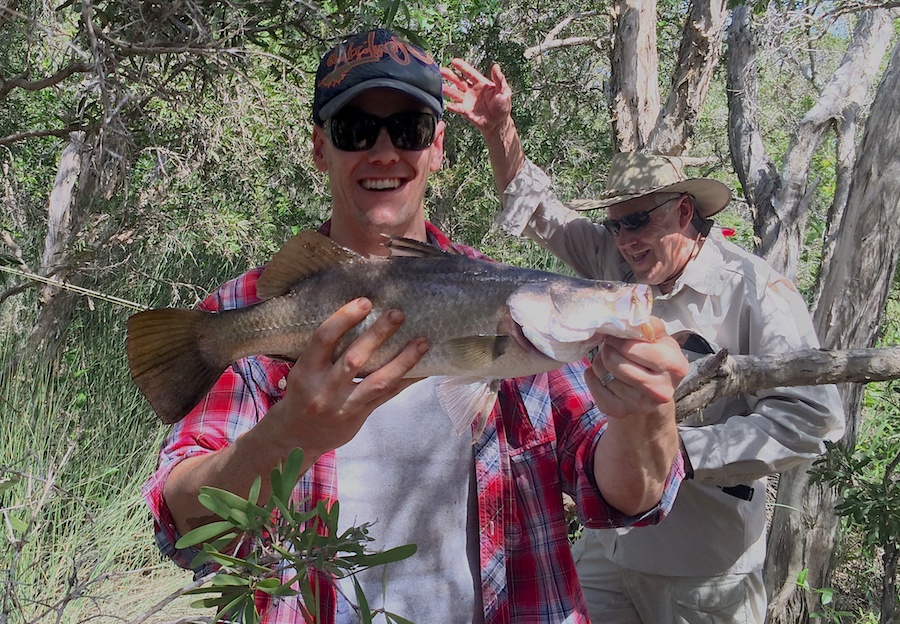 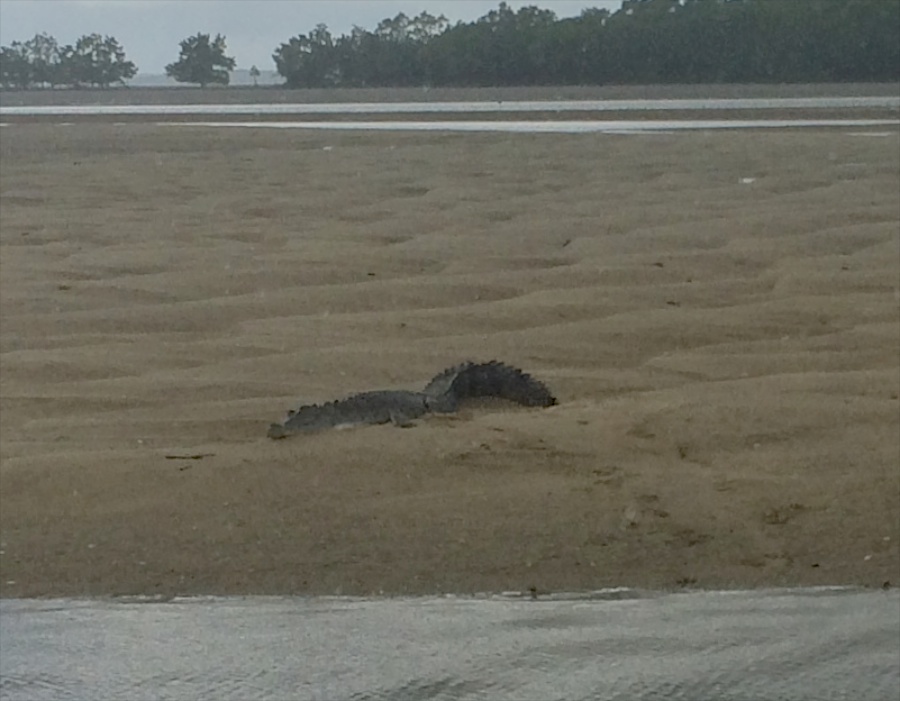 friday saw me headed off to nyinyikay, a small homeland on the tip of arnhem bay, i was joining lirrwi tourism in supporting a film crew shooting some reality TV rubbish involving 6 young city things being taken out of the surburban comfort zone and being confronted with challenges to their personal stereotypes. its all pretty voyeuristic and exploitive, but they wanted to shoot an episode in arnhem land, hence we were driving 5 vehicles, 2 towing trailers, in torrential, tropical rain, 4 hours from nhulun to nyinyikay.

bit of water on the track

we had to cater for 15 crew as well as the cast of 6, so its a lot of resources, tents, stretcher beds, bedding, food and drinks for 21 people for 4 days over easter. given that it had been raining for the last 3 days solid, we were not sure whether we would even be able to get out to nyinyikay , nor whether the cast & crew would be able to fly in on saturday morning.

as it turned out the rain did stop on saturday so we were able to get all the tents set up in time and we had the catering set up on the verandah of the house we were staying in so we had shelter if it rained again. the whole entourage, with thousands of kilos of camera and sound gear, flew in on about 5 seperate small charter flights from gove airport.

setting up the gear

view over the beach

between looking after the clients, we were able to get some good fishing in, i think we ended up with about 5 barra that were keepers, half a dozen each of blue salmon, mangrove jack and golden snapper.

our haul for saturday morning

the big croc tracks we missed!

all of the families of the nyinyikay community were fantastic with sharing their culture and land with the visiting mob, and its certainly a good example of the potential for cultural tourism in the region and the benefits it can bring to small communities seeking sustainable economic models.

i dont know what the TV show is called even, so i cant tell you to watch out for it anyway, which is just as well because i think the cringe factor will be high.

beach beside the airstrip 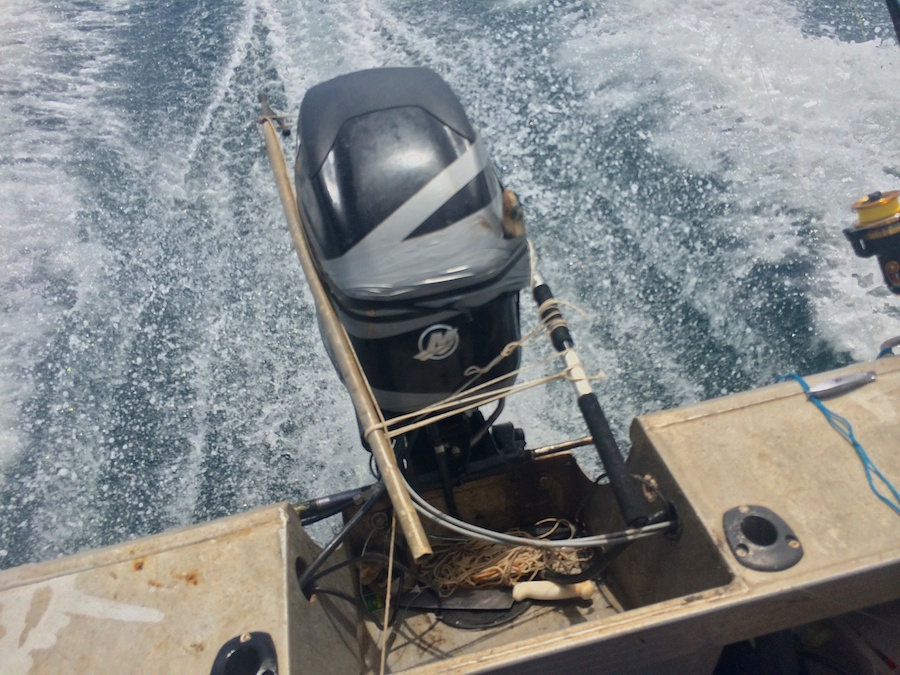 so today was a perfect, windless, wet season day, so we loaded the tinny up and headed out for a fish, the plan was to head up to last chance shoal to troll for a few macks and then on to cape wilberforce for some bottom bouncing on some bommies up there, finishing up with lunch on the beach at elizabeth bay.

the best laid plans of mice & men etc…..we got up to last chance shoal and almost straight away hooked up a fish, i told kai to pull it in and so he started pulling the trolling line in, it came really easy as if it were a very small fish, but when it got to the boat I realised it was a big mack and it was very green – it saw the boat and me swing down to gaff it and it went mental, as it took off vertically out of the water at the back of the boat it tore the hydraulic line out of the ram for the steering on the motor!

i spent the best part of an hour trying to repair it, but had no luck so I had to macgyver a hand steering setup with the gaff, an old boat hook, a roll of duct tape and some cord line! anyway it got us home so alls well that ends well!

this morning i was reminded of why this is such a special place and how much i love my life here! i decided to go for a fish today and on checking the tides saw it was high tide at about 10:30, i wanted to fish the turn and fall of the tide chasing some barra in the bay, so I chucked a couple of rods in the boat and about mid morning headed out to catalinas to launch. 5 minutes later I was over in the mangroves on the other side of the bay  –   the only boat on the water, a light breeze and sun shining!

I spent a couple of hours working the rocky outcrops and mangroves as the tide started to fall and pull the bait out of their cover, using the electric Minn Kota means its stealth mode and you get to see everything going on in the water, i saw schools of beautiful diamond rays, black backs speckled with white spots, i saw little reef sharks cruising the shallows, schools of mullet and gars, sea eagles waiting for lunch and jabiru storks flying past.

The barra were proving hard to raise, but a beautiful big squid, sparkling iridescent colours, showed more than a passing interest in my soft plastic prawn, but he was too slow and a golden snapper stormed out from a rock and snatched the prawn from in front of the squid, it wasnt long before a mangrove jack was added to the esky and then I had a good battle on light gear with a decent tarpon. in between i caught a few small trevally and a fat old black bream.

I was back at the boat ramp by 1:30 so a quick 3 hours on the water, a wealth of wildlife observed, a couple of nice keepers in the esky, some fish for family on the way home and life is good!

at the boat ramp 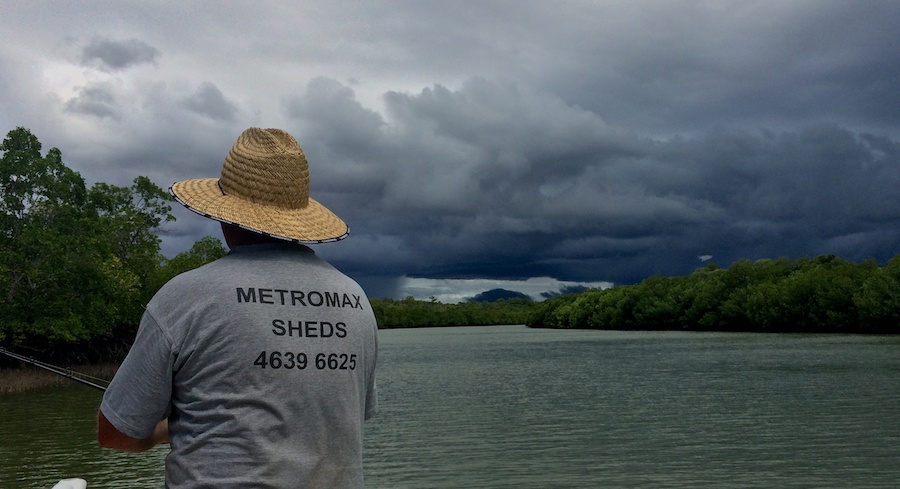 friends are special, its a self evident truth, but we were reminded of it this week past when old friends Brian & Penny visited nhulunbuy. they left about quite a few years ago, but we have remained in touch over the years and caught up a couple of times.

brian & penny stayed with our mutual friend dave, but the days started at rick’s bar and grill for coffee and ended here for dinner and copious amounts of alcohol! we once again enjoyed sharing our table with others with a fine appreciation for food, meals included char grilled steak with grilled vegetables and french fries, freshly caught fish in panko breadcumbs, thai fish cakes, mango salsa and wild mountain rice, fish amok (cambodian curry), and potato and mackerel bake.

brian, dave and i worked on several EBAs together and i grew to admire his intellect, humour and humanity – and a week of fishing, drinking, eating and talking crap only confirmed what a great mate he is. it was also good to spend more time than we usually find for each other, with dave – we live 100m from each other and dont spend as much time as we should hanging out.

its so important to maintain relationships across time and space, beyond family its all we have and one of the main things that defines us.

as with all really good friends, we may not stay in contact, or even catch up all that often these days, but when we do it just picks up from where we left off.

we got plenty of fishing in too, brian got some nice barra out of the bay  and we had a great days mackeral fishing out on dave’s boat.

anyway, time to let the images do the talking!

today was one of those superb wet season days, no rain, light breeze, flat water and hot! so we loaded up the tinny and headed off for a run down to bawaka, we caught a nice mix of fish on the way down and had planned to drop most of the catch off to the community when we got there. everyone must have been off hunting as there was no one there so we took the fish home and dropped it off to family in Yirrkala.

tonites dinner is barramundi cod, not a fish i normally keep as they mate for life, but I caught about 5 in a row and got sick of throwing them back! for some reason i didnt take any pics of the fish!