I had heard about Ishan Aknur, self proclaimed world’s best taxi driver, from my friend annie. I realised he also featured in the episonde of ‘no reservations’ that anthony bourdain filmed in istanbul and we also discovered numerous other media appearances around the world on his website, HERE.

we engaged his services for the day yesterday and he picked us up around 10am and we headed across the bridge and through taksim on our adventure. the day was destined to be drama filled, ishan got a puncture just before picking us up and then outside of taksim we got caught up in a traffic snarl due to an office block being on fire! having negotiated the fire brigade we were then brought to a standstill by a demonstration of some sort by students – forcing us to take an alternative route again.

our first stop was the Çırağan Palace, now a very flash hotel, but originally a sultans palace on the banks of the bosporus. history buffs can read the details HERE.

ishan told us he would drop us at the entrance to the hotel and we should pretend to be guests and walk down to the right until we came to the original palace and have a steaky beak around the palace and its grounds while he waited for us. apparently the subterfuge was required due to some dispute between hotel management and himself. i suspect it was largely all part of the sense of theatre central to ishan’s tour! 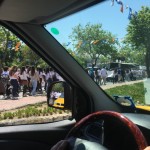 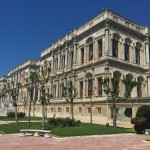 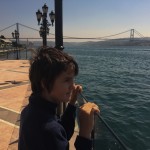 kai on the palace forecourt, bridge to asia in the background. 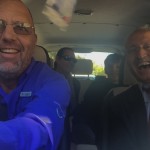 in the mad taxi!

its pointless to try to describe ishan and his antics in the taxi, best just to go to his site and watch a couple of videos, you will quickly get the idea! our next stop was across in asia, istanbul is the only city in the world to bridge two continents, half is on the european side, and when you drive across the bosporus bridge to the other side of the city you are actually driving into asia!

we drove up to the top of the highest hill in istanbul which has sweeping views back across the city, it was pretty smoggy so the pics werent the best, but it was worth the visit. after that we headed back into eminonu to find the best turkish delight store in the world, for kai. the shop has been operating for over 200 years and the turkish delight lived up to its reputation!

the final stop before lunch was the fatih mosque and we saw the serious side of ishan as he explained the process and significance of prayer at the mosque. the photos i took inside simply didnt do the structure any justice, they are certainly incredible buildings. 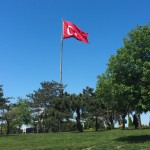 heading up to the viewpoint 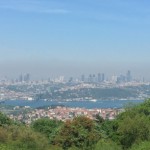 looking back down over istanbul 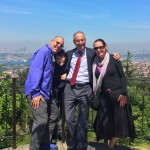 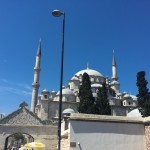 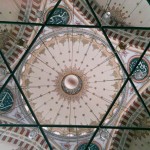 detail of the ceiling in fatih mosque 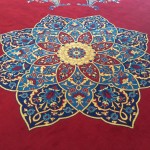 detail of the carpet 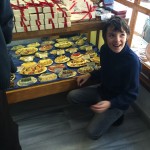 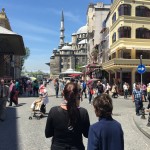 lunch was at sur ocakbasi, a restaurant made famous by anthony bourdain’s visit. they cook whole lambs in an amazing fire pit that the lambs are lowered into and then the pit is sealed up while they cook slowly. the end result is the most tender, melt in the mouth lamb you have ever eaten! 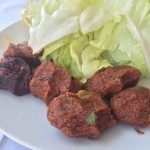 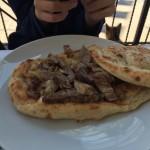 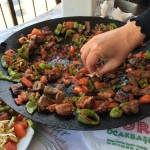 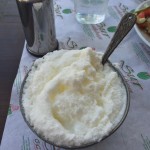 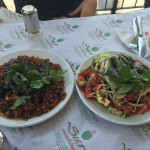 after lunch we finished off the day with a visit to the chora museum in the church that dates back to the 5th century. it is the site of the most incredible mosaics and frescoes lovingly restored to their former glory. history and culture buffs can read more HERE

here is a little homage to anthony bourdain and ishan. (you have to watch the episode to get it) it also gives some insight as to why he is also the craziest as well as the best!