so tomorrow morning we are off to phnom penh, by car and then boat down the mekong river. we cant catch the boat all the way because being the middle of the dry season, the water is too low up this end.

siem reap reminds me of so many of the larger towns i have stayed over my many years of travelling the world, it takes 3 or 4 days to really get connected with the energy of the place, to work out where to eat, where to shop, and to start relaxing into the transition from traveller to resident – not resident in the sense of living permenantly in a place. Rather being at ease sufficiently to feel like you have stopped moving.

unfortunately that often means you are leaving just when you get the sense you should be staying!

siem reap is a dirty, dusty, flat town with few redeeming features – but like so much of the world, the redeeming features are the people and the food, tonite was a perfect example. we went back to the little restaurant that our guide had shown us, and where we had lunch with him 2 days ago. tonite we picked through the menu and kai had a simple but yummy fried chicken dish with rice, we had a simple fish soup with morning glory, a pork and vegetables salad and the wonderful fish & pork omelette (whoddu thunk!). 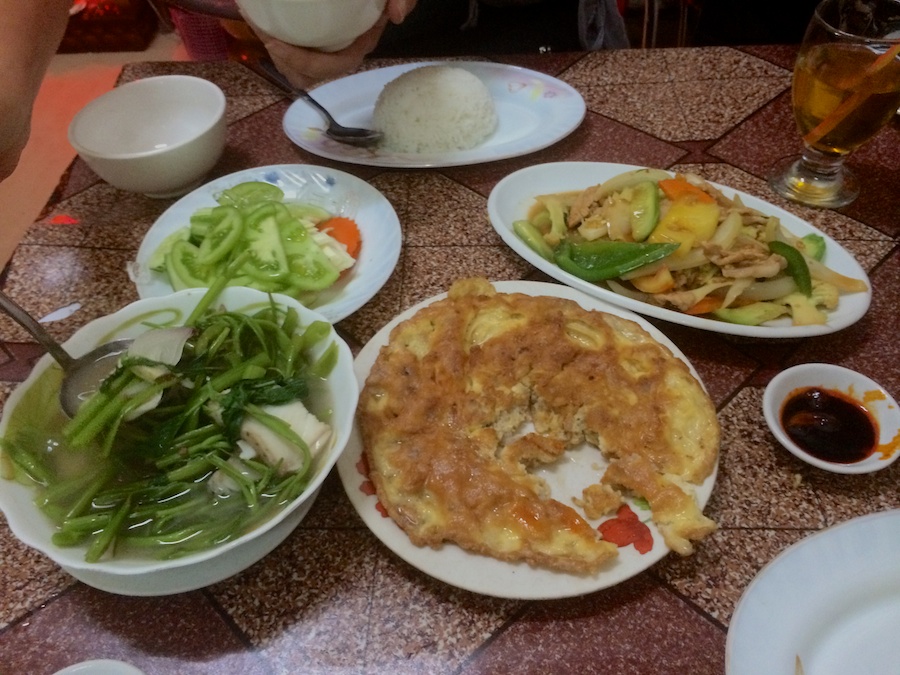 a splendid and simple meal, with a room full of laughing and friendly cambodian girls who cook and wait on the few dodgy tables and plastic chairs, a family of orphaned girls taken in by their uncle and set up in the restaurant as they grew up. kai ended up sitting with one of the sons of one of the sisters and tried his best to ‘corrupt’ him by playing games on the iPhone with him. so we sat and had a cool beer, chatting with the girls, watching some inane comedy in kmher on the TV while 2 boys were absorbed in their games of the 21st century. 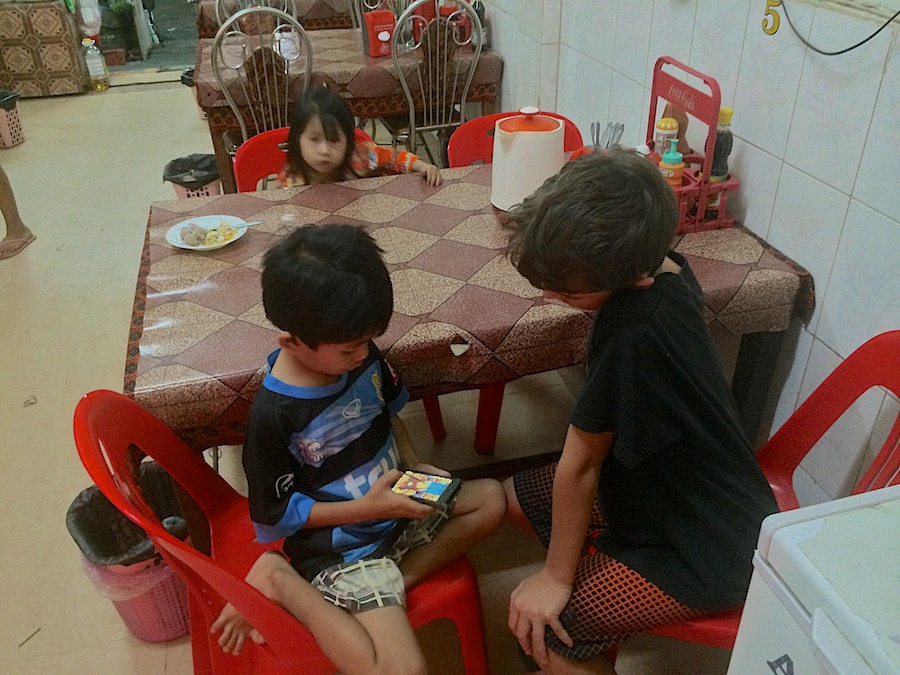 its that simple, and its more than enough for me, its why i travel, i have never been one for seeking out other tourists to sit and chat with, to hook up on facebook or compare lists of places been and things done at the shallowest level, travelling for me is about that interconnection with the people, culture and food of the places we visit.

yet in a city filled with thousands of tourists we saw almost none sitting in the khmer restaurants, or eating the street food with the local workers, and I never saw another child interacting with the cambodian kids – and we wonder why there is so much racism and xenophobia, although I am not sure which is the chicken and which is the egg.