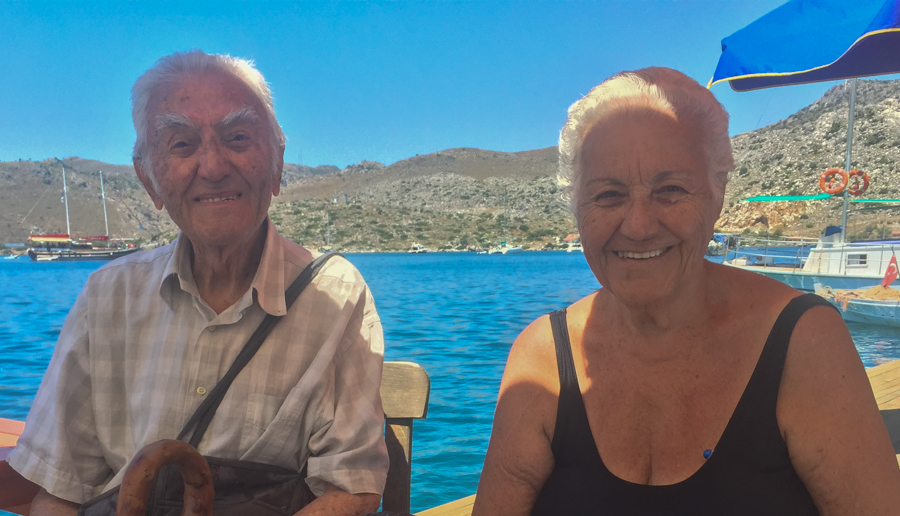 aydin & hale at the wooden beach

one of the great things about staying in smaller places for a siginificant amount of time when you are travelling is that you meet people you would otherwise never cross paths with. aydin & hale menguç live in istanbul – but we would never have met them in the 2 weeks we spent in a city of 17m people!

here, they are staying in one of the apartments for a month and we have moved from polite ‘hellos’ to a real friendship and socialising. yesterday afternoon they joined us for a few beers and nibbles at our table under the grape vine and I actually recorded the conversation because they are such an interesting couple and i wanted to capture their story.

aydin is 95, born in 1920, 3 years older than the Turkish Republic! hale is a younger and sprightly 88! they have been coming to bozburun for 30 years and staying with the Ünlü family that own the apartments we are staying in. they will have been married for 65 years next week – on the 1st of july. they swim nearly every day, and are pictures of health and happiness. both aydin & hale speak perfect english and are both sharp as a button mentally.

aydin went to school in istanbul and went on to do law at istanbul university, he graduated after 4 years and then did a further 2 years study before becoming a judge in the turkish magistrates court, eventually he became chief judge in the supreme court and later the senior public prosecutor. he spent a year living in london during this time where he was sent to study the british legal system. after some years working as a judge and public prosecutor he retired and became a lawyer.

meanwhile hale had started work as a librarian for TUSLOG (the us logistics group), part of the NATO operations, as a result of a chance meeting at a party at hale’s work he met an american captian who was a judge advocate for TUSLOG and they needed a legal advisor so aydin became the chief legal advisor to the american forces, he started this role in 1963 and worked for them for the next 28 years, until his retirement at 72 years of age.

hale has held many interesting jobs also, as well as a librarian, she was an english teacher and a swimming teacher. she also worked as a technical interpreter for the building of the bridge over the bosphorus joining european istanbul with asian istanbul, the bridge was designed by the british hence the need for an interpreter.

aydin’s father, feyzi was a four star general, he fought and was wounded at canakkale (what we call gallipoli), and later became chief of the general  turkish staff and a personal friend of eisenhower’s. i found an amusing anecdote about him HERE

(click the play arrow and wait, to hear aydin talking about his father.)

their love story and marraige of 65 years started when aydin travelled to istanbul for his sister’s wedding, he ended up falling in love with his brother in law’s sister – so brother and sister married sister and brother! its a beautiful thing to see a couple so obviously in love with each other after such a life together, their passion for life, energy and enthusiasm with a very positive outlook on life must be a contributing factor to such longevity – both individually and collectively.

(click the play arrow and wait, to hear aydin & hale talking about how they met.

i think we are very privileged to have met them and to have aydin and hale share their life story with us, they are an inspiration and I can only hope that i am still swimming at 95 – as well as enjoying a few cold beers and a lengthy conversation with youngsters like us! 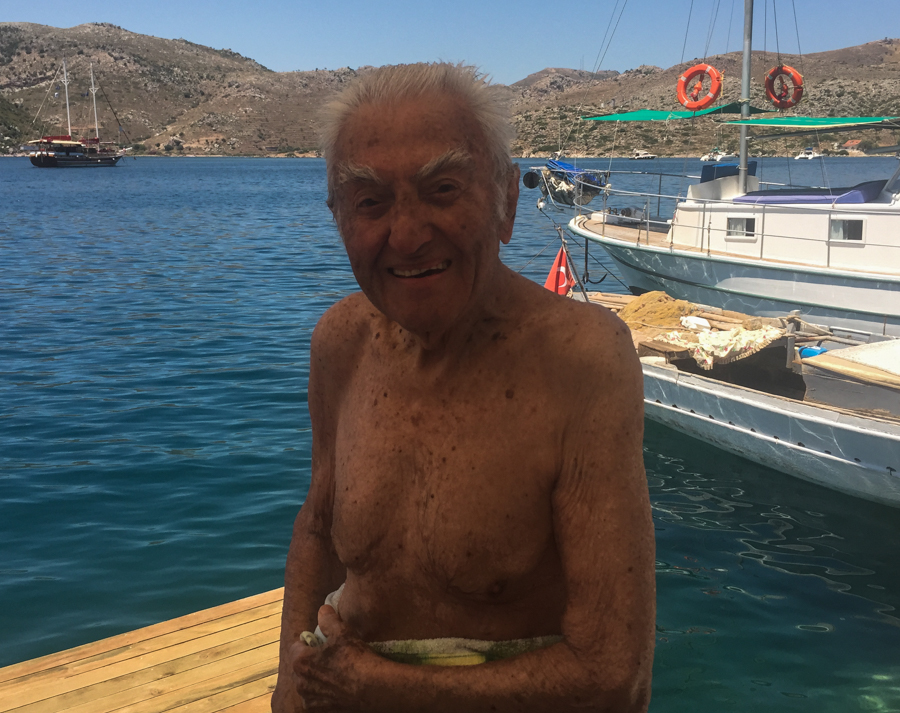 aydin after his morning swim!

there was much more conversation last night of course, but hopefully these words paint a small and simple picture of this amazing couple and their interesting life. its surely a big part of why we love travelling.