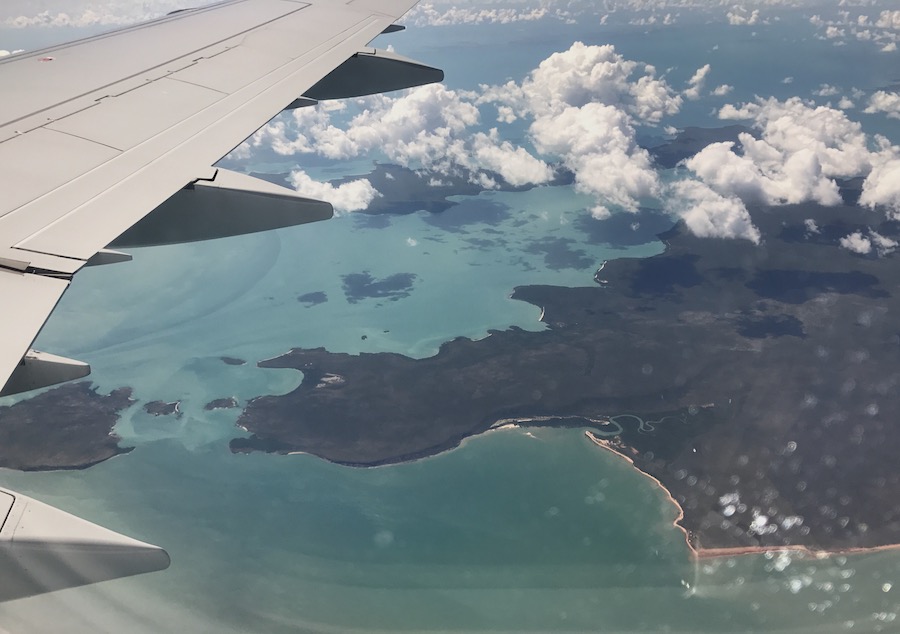 wow, just 24 hours and it already feels like we have been here for days! we certainly packed in a huge amount on day 1. we flew out of nhulunbuy monday afternoon and spent the evening in darwin, a few beers on the wharf and a long meal at the hanuman, we started with their famous oysters, poached in a clay dish with lime, ginger, garlic, fish sauce, coriander, palm sugar and kaffir lime leaves. then we just ordered an entree at a time and shared it between the 3 of us – that helped fill the evening out until we had to be at the airport at 11:30pm for the flight to singapore. 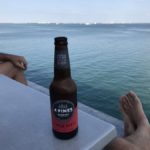 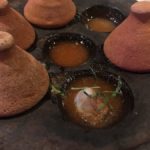 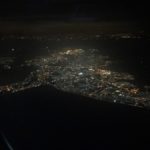 we had a pleasant enough flight over, its just under 5 hours so not too long, landing at changi at around 5am local time. once again we were pleasantly reminded of the efficiency and ease of travel through points other than australia. straight through immigration with no queue (and friendly staff), no customs checks, and job done. we grabbed sim cards for our phones and ezilink cards for the amazing public transport in singapore and then jumped on the MRT train into the city.

we had 3 changes, each one we got off one train, walked to the correct platform and got straight into the next train just as it was ready to leave. we were downtown in about the same time as it would take in a cab. in australia you would still be waiting to get thru immigration at the airport! 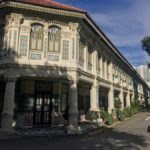 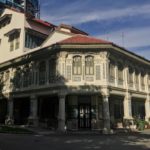 our aparment is on the 4th floor at the back

our quaint little shop house apartment is about 2 minutes walk from the farrer park station in the little india area of singapore, we let ouselves in and left our bags in the lobby as it was too early to check in and then headed out to find a bite to eat in the local area. we found a small indian place around the corner and had a murtabark with dahl and a cup of tea for breakfast. a perfect start to the day.

we wandered through some of the maze of streets in little india before heading back to the apartment and getting the key so we could unpack our stuff, have a shower to freshen up and do a bit of ‘nesting’. at lunchtime we headed out with the idea of finding a close by coffee shop and roastery i had read of. it was well hidden but after finally locating the building i got a quick tour of the roastery with the master roaster before we went into the cafe for one of their coffees and a croissant. the croissant was very good is what i would say about the coffee. 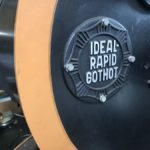 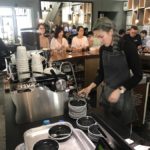 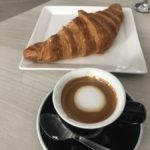 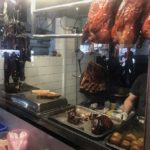 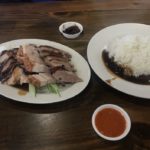 then sal said she wanted to check out a few food stalls she had noticed on the opposite street corner, she said that the bbq duck & pork stall was sending her the right olfactory and optical messaging so we ordered a plate of duck, pork and rice for lunch. it came with a fantastic spicy sambal and was the best chinese bbq duck i can remember having – and we have tried a few over the years!

it was a real find, completely off the radar, out of context because it was in little india, and obviously highly renowned with the locals, a closer look revealed a list of hawker food prizes he had won and copies of newspaper articles about the stall.

we stocked up on a few bits and pieces for the apartment on the way home, milk for morning coffees, mineral water, beer, you know, the essentials.

after that high we came back for a nanna nap in the apartment before an afternoon beer to build our strength before heading out again. we caught the MRT down to clarke quay to have a look around, we did a walk round the old fort canning complex there which was quite interesting and lots of big trees and greenery. then we had a wander through the foody area there, but it was not our scene at all. its a very well done international food venue, like any other, anywhere in the world, lots of flash restaurants and bars, clever design and architecture, outdoor seating, and generally nice looking food. but the point is you could be anywhere in the world, its full of tourists and a few upwardly mobile locals all paying probably 10 times the price for the privilege of eating and drinking in the trendy precinct.

we had heard about an indonesian padang restaurant on the other side of the river that had a reputation for great rendang so we wandered over to have a look at that, but it didnt pass our instinct tests, so we got back on the MRT and headed down to china town. again walking down through the main strip of china town, its just wall to wall places to eat, but still a majority of patrons are tourists and while the dishes looked well prepared and tasty as well, its still not the sort of experience we look for – and its still tourist pricing.

so we kept walking until we got down to the Maxwell Hawkers Market, this is the home of tian tian hainanese chicken rice, the first hawker stall in the world to win a Michelin star. it wasnt open, but i noticed that one stall had a queue of about 20 people lined up to order, it was also a stall that specialised in hainanese chicken rice. we decided on continuing the idea of ordering 1 dish each at a time, sharing it and then the next person ordering one and so on.

so i queued up for about 20 minutes to get us the chicken rice. the wait was well worth it, chicken was on point, tender, moist, tasty poached chicken, garnished with fried garlic, drizzled with a bit of soy based sauce, a bowl of simple chicken broth, some bokchoy (poached in the pot of stock), and rice that has been cooked in the chicken broth with pandan, garlic and ginger. you also get a little bowl of chilli sauce and one with a fresh ginger sauce. 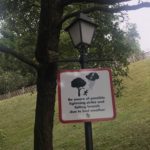 very dangerous, lightning and falling trees at the same time! 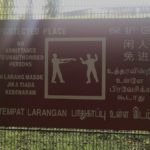 offenders will be shot…and bayoneted 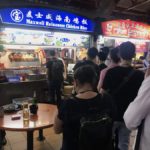 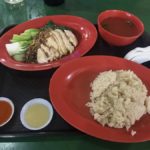 dave got us a yummy muslim dish that was a chicken curry on a bed of scrumptious spiced rice that was full of fresh tumeric, cummin and lots of other unidentified spices. Sal’s contribution didnt match her find for lunch! A shark dish with steamed vegies that was not so good.

then it was back on the mrt to head home for a nightcap before bed, and to reflect on an action packed first day!

this morning we were heading out for breakfast and as we were leaving met a girl, alex, who had just arrived from austin, texas and was staying in one of the other apartments, she ended up coming out for breakfast with us, we headed down to the tekka hawkers market at the other end of little india and found some parat and curry for breakfast before coming back for a siesta. 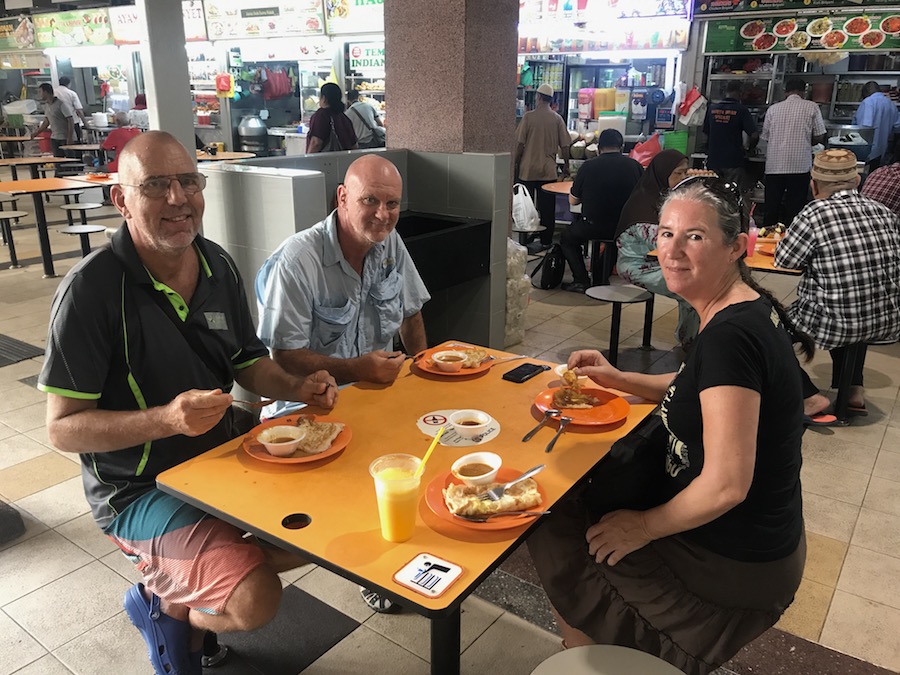