thats karekare beach which is just next door to us at Piha, its where they shot the film ‘the piano’, we went for a swim in the waterfall which is just a few hundred metres behind the beach. we quite often come over here for a swim and a surf, its an incredibly pretty spot – even by NZ standards!

we have had a busy couple of weeks since my last post, slowly bedding down our plans for nz, jeremy gets back later this month so we have to be out of his place in piha, we have scored a housesit next week for a few days in henderson which is nearby, then we go down to a farm at patetonga, east of hamilton for a week, we have some sheep and calves to look after!

then we come back to piha for most of march, we have rented a bach right down on the beach, as in walk out the door and across the lawn onto the beach, so we will be back here for 3 weeks or so, then we head to tauranga to stay with friends a few nights and housesit a home right on the beach at papoama beach, tauranga for a couple of weeks.

with all this moving around, and the fact that jeremy and leesi would be back and need their car, we tossed up renting a car for a couple of months or buying, in the end we bought a little toyota carib station wagon, we will sell it when we leave and it should work out cheaper than renting a car, even if we lose quite a bit on it. 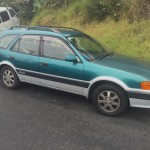 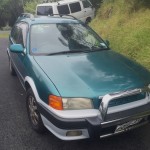 other than that the strawberries and blueberries are finished, but the corn season is in full swing! we are getting 6 cobs for $1.50 at the moment! needless to say we are living on corn! avocados are still 6 for $1 so guacomale is the other staple.

i have also given in on the coffee front, i realised that we were not going to survive 12 months without decent coffee in the morning, so after some hurried research i decided on a ROK Presso for the best compromise between decent coffee and something i could fit in the suitcase, matched with a knock, hausgrind grinder from the UK. for the coffee tragics you can read more about the ROK and the hausgrind on the seekrit squirrel forum, HERE 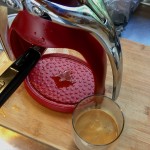 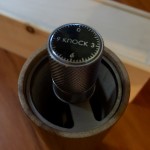 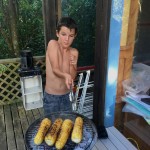 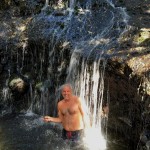 me in the small waterfall, karekare 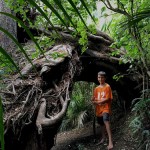 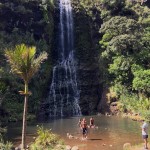 me in the main waterfall, karekare