the view from the summit of mt eden across auckland city

today we headed into auckland to see sal’s cousin, luke, his wife,zekiah and their son lorenzo. they live in the shadow of mt eden hence the photo above. kai and lorenzo had a play and i suspect lorenzo was rather taken with his big cousin! i am sure we will spend some more time with them over the next few months.

we popped down to a little cafe in mt eden for lunch after our visit and went to a place called ‘the garden shed’, the food was nice, but the garden was amazing! 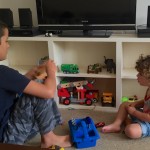 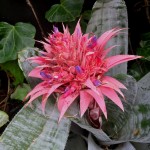 bromeliad at ‘the garden shed’ 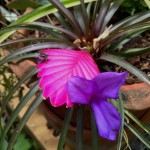 not sure what the hell this was! 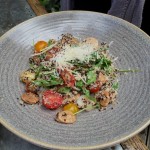 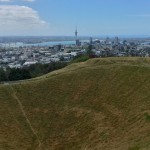 across the crater of mt eden to auckland

we went for a lovely walk to kitekite falls on new years day, its a walk through kauri forest and ferns that winds its way up from basically the center of piha to the falls at the top of the surrounding hills. there are lots of walking tracks up here and we are only just starting to explore them.

meanwhile i have been enjoying the fresh produce and cooking up a few storms, we got some lovely salmon fillets which i pan fried and served on a bed of fresh parsley and rocket from the garden and a caramelised fennel side, with local asparagus, roasted potato and garlic chips.

today we picked up enough mussels for sal and I and i cooked them in coconut cream with ginger, garlic, onion, chilli and coriander – $2.50 worth of mussels and it was sublime. 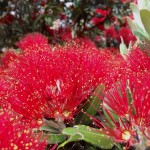 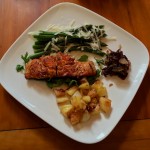 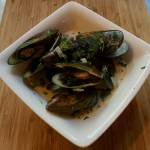 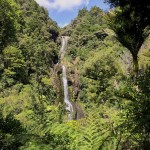 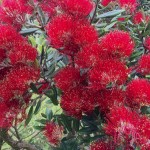