easter is usually crap weather regardless of location – whether you are camping in tassie, fishing in esperance, hiking in the daintree or boating in arnhem land, it typically pisses down for most of the 4 days. this easter though held a different promise, the dregs of cyclone bloody nora had slipped away, and with it the thunder storms and rain. the forecast was exceptional – clear weather with very light variable winds.

we had planned a trip away in the boat before discovering how good the weather was going to be, dave had his 4 days off exactly lining up with the easter break and so it was going to be the four of us heading off – but unfortunately the weekend before easter, sal’s dad finally succumbed to his battle with mesothelioma and so she had to fly down to the gold coast. so it was left to dave, kai & I to make the most of the promising conditions! 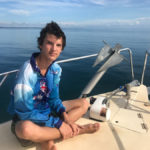 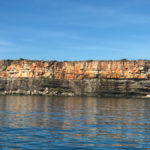 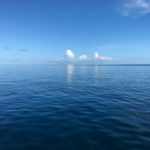 south to the mainland 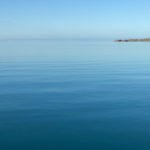 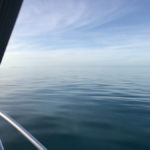 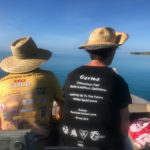 dave & kai in the tinny

we headed up to the wessel islands friday morning, we left the boat club about 9:30 and by midday we were anchored in an unnamed bay south of raragala bay on raragala island, its one of our favourite anchorages. the trip was uneventful with the promised calm conditions allowing us to make good time up to cape wilberforce and then across to the passage between wigram and cotton island before crossing donington sound to the wessel islands.

we spent our days exploring the beaches and bays along the southern side of raragala island, fishing the open waters for tuna and mackerel and the rocky shelves of raragala bay for mangrove jack. we climbed up waterfalls to discover spring fed streams at the top and amazing views across the water, we swam in waterholes – including our favourite one at the base of a waterfall that is large, deep and shaded by trees. kai was in first when we arrived and yelled out to dave that there was a big water monitor in the pool, before climbing up the waterfall. dave went to get in to the pool and discovered the “water monitor” was a 1.5m salt water croc!! kai had actually nearly landed on top of it when he jumped in!

dave at the top of the waterfall,looking down on the pool 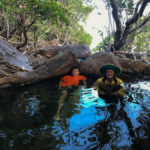 the pool at the top of the waterfall 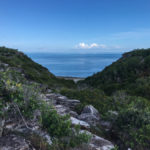 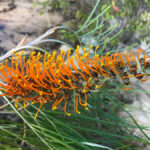 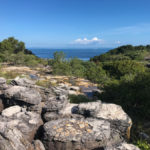 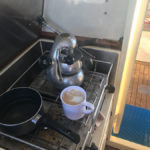 we tried to get it to ‘move on’ but it just moved into the deepest part of the pool and lay there quietly so we decided to share the pool with it and hope that it didnt get agitated and nip us!! it must have decided the company was unwanted because every other time we went there for a swim there was no sign of the croc! 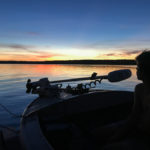 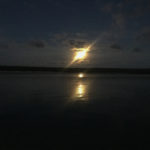 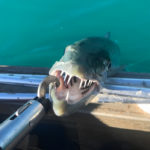 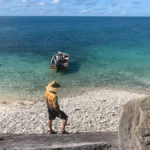 another stream and waterfall explore 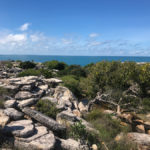 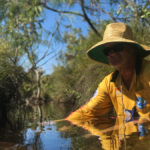 of course there was some cold beers, good wine and yummy food eaten over the 4 days, we watched sunsets, moon rises and gazed at the tapestry of stars. i took the vintage atomic coffee machine so the mornings were started with decent coffee which makes everything better! kai had a ball, caught some good fish, used his new snorkelling gear for the first time and enjoyed the calm weather! we missed sal, but there will be many other trips with her. 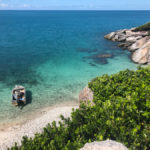 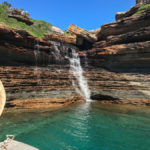 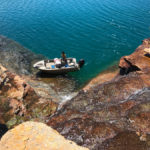 looking down from the top! 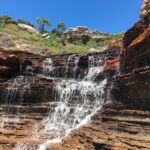 a tricky climb up! 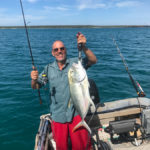 a nice GT on light gear 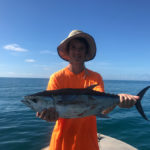 kai with a tuna

we also came across an amazing scene in raragala bay, we were attracted by obvious activity with heavy splashing on the surface of the water, expecting a school of tuna we headed over in the tinny to discover a school of bait being rounded up and chomped by a huge school of sharks varying in length up to about 3m! there were also some tuna and GT’s amongst the carnage! we hooked a couple of nice GTs off the edge of the school on our light barra gear.

the same activity was happening the next day whe we went back and I got some video footage, the bait fish decided to try to hide underneath the tinny and as we motored off the school of sharks followed us like the pied piper!

another unlucky fish was spotted floating between the big boat and the tinny tied up alongside, we thought it was a trevally at first, but as it moved we realised it was a big sea mullet. i grapped a spear out of the tinny and had the easiest shot ever to get a fish that size! as you can see from the photo he had been attacked by a shark or something so thats probably why he was lazing around the boat.

we headed home on monday and if possible it was even flatter than the previous 3 days! i took photos off the side of the boat and the reflection looks like a mirror the water was so flat – and we were travelling at 16kts! all in all a fabulous and relaxing trip. 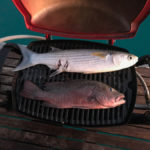 mullet and jack on the bbq 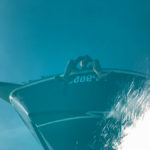 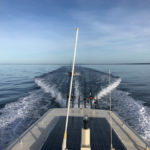 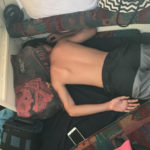 first mate sleeping in on the way home 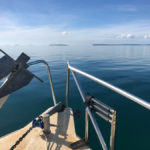 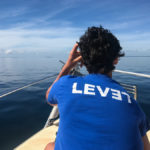 a video perspective of the reflections and the flat ocean,