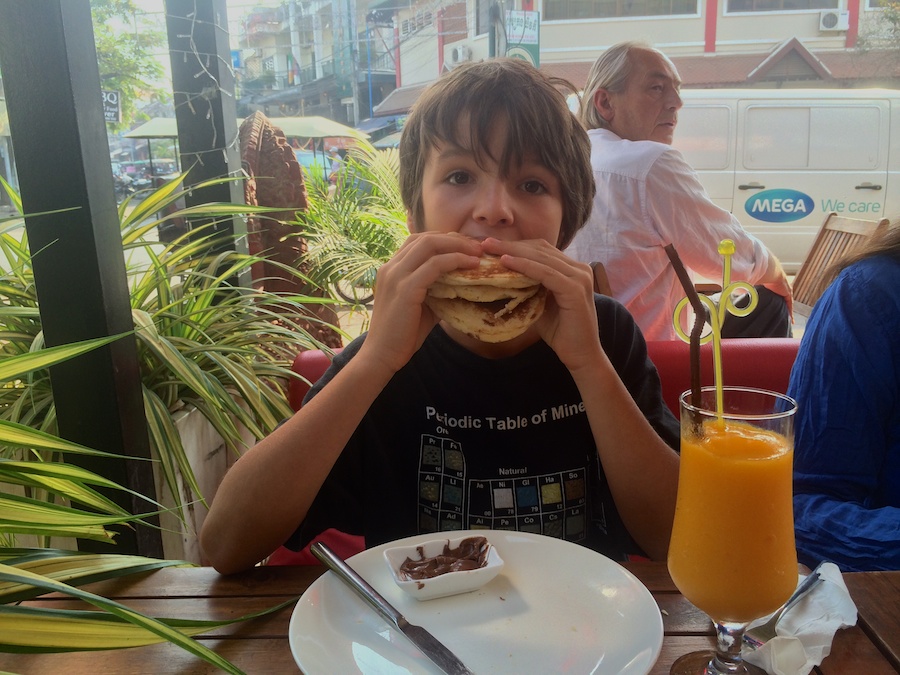 this morning we found a little french cafe we had been looking for, kai woofed down pancakes and chocolate, which while not very healthy, were delicious by all accounts. he then had a hair cut and after lunch Bun picked us up and we headed out to the temples again, first up was Ta Prohm, where scenes of the film Tomb Raider were shot. it is largely overgrown with huge banyan trees wrapped around and growing through its structure.

Ta Nei was the second one we visited, also largely overgrown by the jungle, but as its hidden away down a dirt track very few tourists visit it, in fact while we were there we were the only people visiting the temple – a welcome relief from the hordes crawling over the other temples. we were able to get a real sense of the peace and serenity of these incredible temples set in the towering and shady jungle.

the final temple we visited was Bayon, this temple was built in a period of peace between hindus and buddhists in cambodia and the intricate carvings reflect this. its known as the temple of faces due to the large buhdda faces carved in the towers.

our final stop for the day was to observe a troupe of monkeys playing in the grass beside the road, it was a highlight for kai, there were several new born babies as well as big males, pregnant mums and juveniles. we bought some bananas to feed them with and i discovered they dont like having their tails pulled – i was only actually giving it a gentle tug to encourage one to turn around for a photo, but i have a scratch on my leg to prove it!

the one that attacked me!

we actually enjoyed the 3 temples today much more than Angkor Wat, they were smaller and more intimate, the shade from the huge trees makes them cooler and overall they just seemed more interesting.

the history of the whole region is fascinating, the vandalism by each of the religions towards the others is such a sad indictment of organised religion, so many of the carvings defaced after changes between hinduism, buddhism and islam as the state religions in the khmer kingdom.

the damage is much worse than that caused by 900 years of weathering or decades of ferocious war in the 20th century.

the sheer scale of the empire at its peak in the 12 century is hard to picture, such enterprise, infrastructure development, enginineering and pure human effort is hard to imagine – especially as the whole region was basically deserted later, hence the fact that all these temples lay unknown and undiscovered until the 1930’s.

tomorrow we are having a lay day, then sunday we are catching the boat down to Phnom Penh.

click on the ‘i’ in the top left hand corner of the images to see the caption.

One Response to “temples & monkeys”