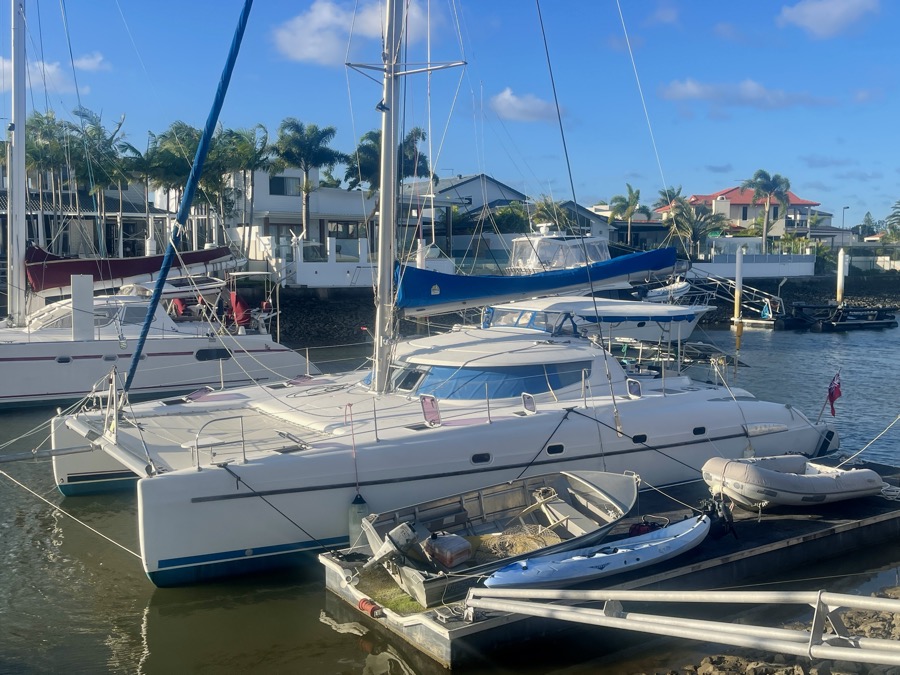 lumiel on the jetty

so the journey begins! on thursday the 10th of march, sal, dave & I flew down to brisbane to bring our boat, lumiel, back home to gove. i have titled this blog entry, voyage01 and will try to make regular updates with the titles in sequence. we had planned about a week in birkdale on the jetty before starting the trip home, this was to allow for a couple of jobs we were aware of and provisioning. 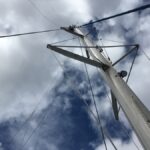 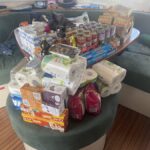 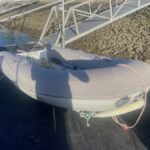 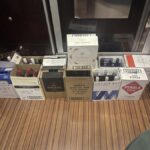 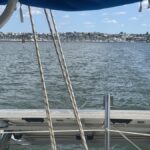 departure from manly, brisbane after we filled up the fuel tanks

unfortunately it ended up being about 2 weeks due to some unexpected issues we had to deal with (boats!). we went out for a sail with the previous owner, john, on the saturday after our arrival, and while we were out on the water john noticed that the port engine was no longer giving us drive. this necessitated disconnecting the engine from the sail drive and moving it forward to allow disassembly of the pinion drive shaft. john had broken a shaft 3 years ago in fiji and had it replaced by an authorised yanmar service agent there.

as incredible as it seems, it appears the mechanic never replaced the bearing lock nut that holds the shaft in place, and finally after 3 years it moved far enough forward to disengage from the engine! it was a lot of stress and time, but in the end it was an easy fix that only cost a few dollars in parts.

other jobs were repairing the dinghy which had some leaks, and installing a cell-fi aerial for extended mobile range. the aerial cable proved to be impossible to run in the mast at this time, but while up the mast i identified the masthead sheaves needed replacing. luckily i found a rigger nearby who was able to make up some new ones for us. finally we had to replace the house batteries 2 banks of 4 12v deep cycle batteries.

while dave & i dealt with all these issues, sal was constantly shopping for everything we felt we needed both for the trip home and for our use of the boat – as well as the actual provisions. this kept her busy most days! she also carted loads of washing to the laundromat.

special mention for a few people, the previous owners of lumiel, john & trish, who were fabulous, they never stopped helping us, looking after her while we waited for the right time to pick her up, being our personal post office for lots of stuff we got sent to them for the boat, and always happy to help and explain anything to us. their love for lumiel shone through and it was a night of mixed emotions when we all went to dinner for the last time before we departed. 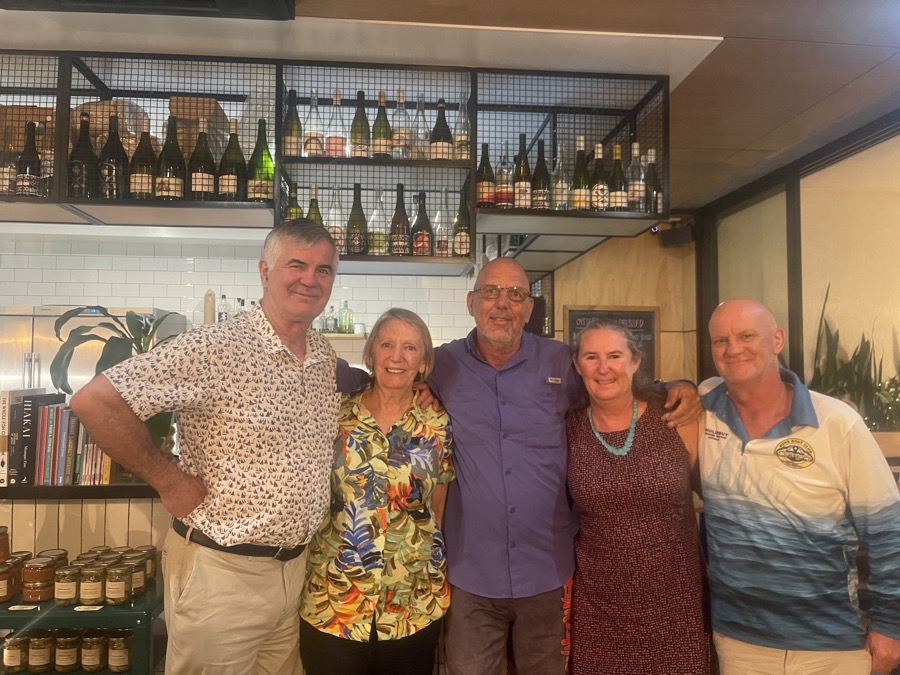 also robyn, our taxi driver, since our first trip down in january when we ‘discovered’ her, she has been at our beck and call taking us where ever we needed to go to do whatever we wanted. always full of helpful advice about where to get stuff, good humoured kind and considerate. a lovely person.

finally, carmel anne and wayne who owned the dock lumiel was moored on. they were always friendly, super supportive of our needs given we needed to live on the boat while we waited to depart which you are not really meant to do. we are so grateful for their putting up with us in their backyard! special mention to their grand daughter who picked a big bowl of mexican cucumbers from carmel anne’s vine for us – which i then pickled and go so well with a nice cheese and bit of salami!.

after nearly 2 weeks we finally had everything in order and on monday 21st march we left birkdale, popped over to manly, filled up the fuel tank and then motored over to belinda bay on moreton island for our first night of the voyage. 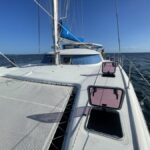 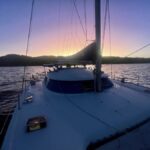 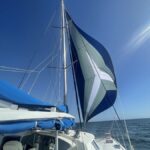 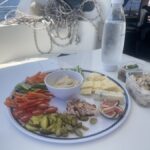 i am writing this sitting in the lagoon at lady musgrave island, just 4 days after leaving birkdale! after a night at belinda bay we set off for noosa heads at 5:30am. we had a pleasant motor sail with the lightweight screecher and dropped anchor just off laguna beach for the night. the surf life saving club on the beach didn’t like us anchoring so close in and called us on the loudspeaker telling us to move further out as the water was full of pretentious wankers who didn’t appreciate a yacht in their midst. we sort of moved out a little bit and ignored them. 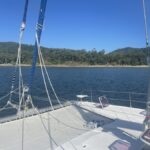 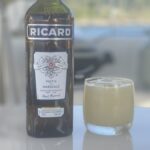 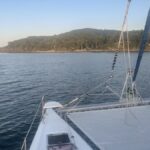 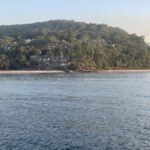 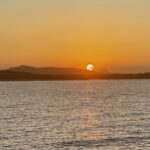 we wanted another early start as we needed to make double island point and get across wide bay bar around 11:30 for the tide. we had not intended to go thru the great sandy straits but rather round the outside of fraser island but the weather conditions and forecast led us to change our minds. there was almost no wind all day and we just kept going, noosa, wide bay bar, great sandy straits and all the way up to within sight of hervey bay and dropped anchor off big woody island. 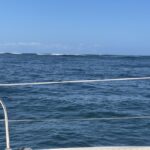 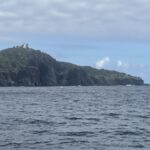 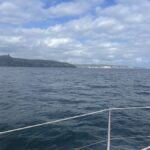 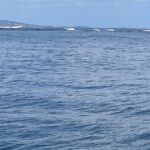 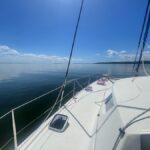 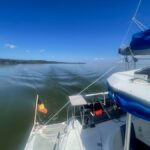 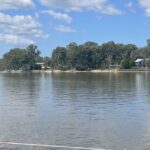 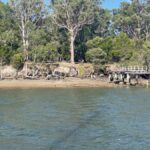 jetty ruins top of the strait 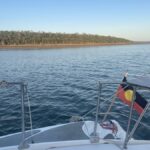 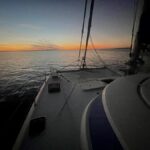 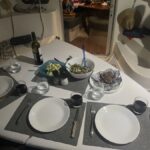 the forecast was for light easterly to northerly breezes for the next few days so after some discussion over a few drinks we decided to spend the night and most of the rest of the next day anchored at big woody island and then weigh anchor and head off for lady musgrave island. we needed to be there at about 10am for the tide to get in thru the channel into the atoll and i calculated it was about an 18hr sail. we had a stunning sail thru the night with 8-12k ENE winds pushing us along and a magnificent moon rise on sal’s watch, a couple of passing trawlers on my watch and we arrived right on time at lady musgrave.

thats probably enough for a first post, so i will leave it there and send this one off!