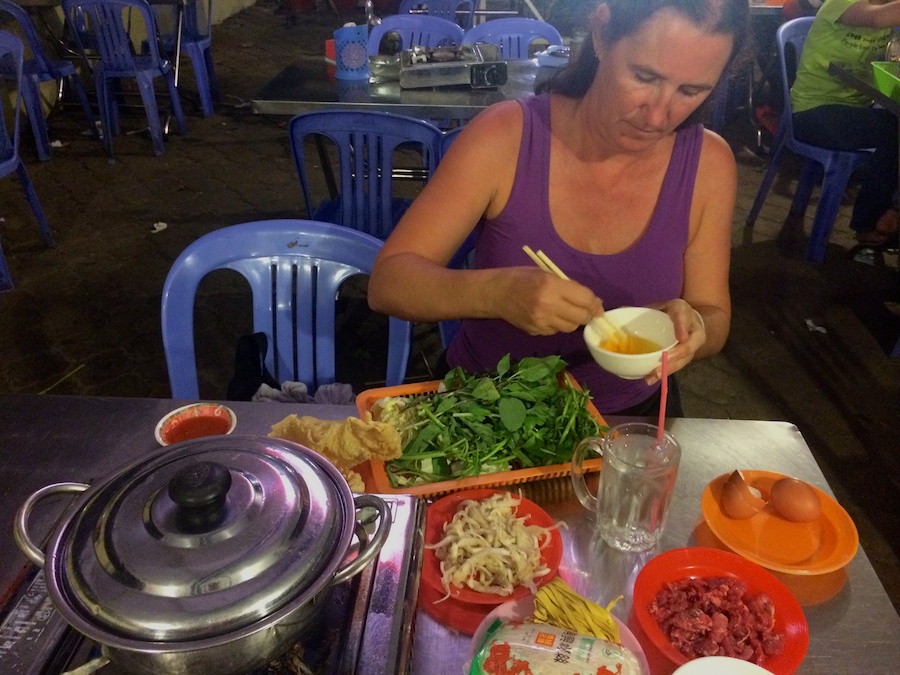 tonite sal & i walked down to the riverfront for a couple of beers in a cafe overlooking the esplanade, after 2 large handles of beer each, we drained our wallet of the princley sum of $2 and then walked along the road where we had seen street vendors set up last night, all the tables had little gas burners on them which the cambodians call BBQ’s so we sat down and waited until a couple of giggly girls with no english turned up at the table, they gave us an arrangement of veges, herbs, eggs, noodles and raw meat as well as a pot which they put on the burner.

turned out the pot was full of tasty stock with dumplings, we then added the rest of the ingredients to our own taste and timing and then ladled the resulting noodle soup into bowls and tore up vietnamese mint to add to it – it was superb, the stock is yummy and adding the extras and cooking at the table just adds to the whole experience.

we provided free entertainment for the local diners as well as the giggly girls, watching the clumsy barangs trying to cook, serve and eat their local dish!

we woofed down all our stomachs could hold, then we had a couple more beers to wash it down and this time had our wallet lightened by  $7 – and we left enough in the pot to feed a small village!

ps please subscribe to the blog if you wish to get email notices when there is an update!

today we found the ou ruessei market in phnom penh, its the real khmer local market where all the farmers sell their produce, its complete mayhem! thousands of vendors selling fruit, veges, meat, seafood, dried products, cooked products, spices, sauces, you name it, they have it.

the market is a swarming mass of humanity, an olfactory overload and visual kaleidoscope, its tighter than a can of sardines, the floors are wet and uneven. the massive undercover market is surrounded by a moat of motorcycles 10 deep for its entire circumference and there are hundreds of tuk-tuks touting for transport to and from. no one speaks any english, there are no tourists and all transactions are in local currency (khmer riel).

although i wasnt hungry i couldnt go past the freshly made spring rolls with vermicelli noodles and pork, at 500 riel (25c) I think i was charged tourist price, but what the hell, they were to die for.

click on ‘i’ in top left corner of images for description

in other news today, we nearly got caught up in a protest this morning, the street we were walking along had the protest walking down the street the other way, there was several hundred people blocking the road with placards and monks in the frontline, police started pouring in to the area, people were running away past us and we decided descretion was the better part of valour and turned tail and ran away as well! we saw truckloads of riot police in full body armour, shields and armed with what i presume were guns for rubber bullets and smoke canisters.

news of the protest here – http://abcnews.go.com/International/wireStory/cambodian-police-break-protest-tv-license-22155393 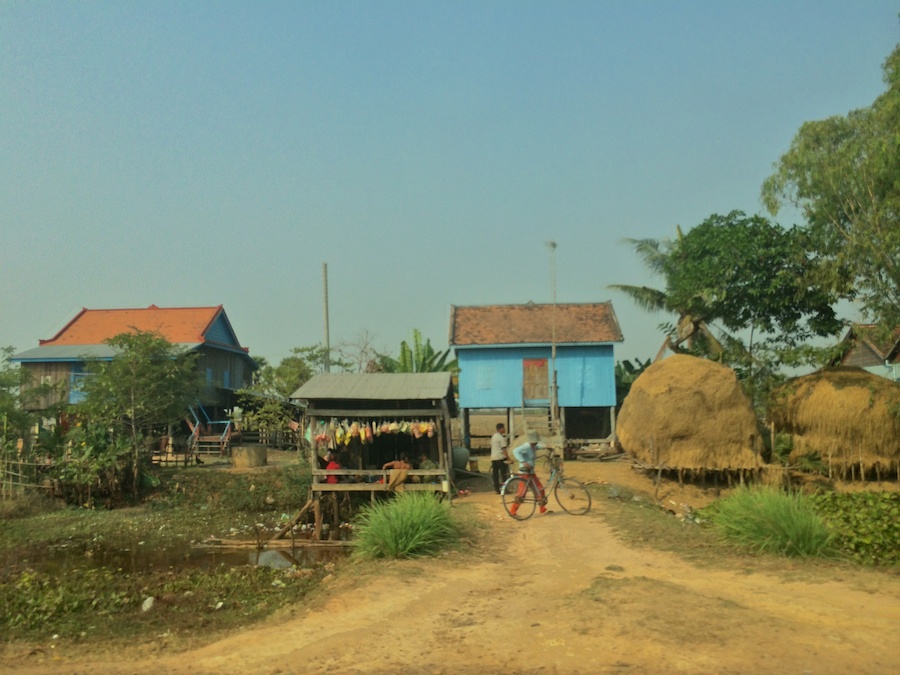 this morning we embarked on a journey that we might have had second thoughts about had we known what it actually involved! because of the low river levels in the dry season we had to be driven to a point at the river where we could join the boat, we were told it was a 4 hour journey but it took over 5 hours!

the roads in cambodia have to be seen to be believed, this is the major highway in cambodia and its atrocious, the bitumen sections are filled with huge potholes that look like they are remnants of the bombing in the war, they are about half a metre deep and when they are not deep they are filled with large sharp rocks. much of the road the bitumen is gone and its just gravel with clouds of fine dust – i have no idea how the driver knew where he was going much of the time.

there were 2 more of these pots on the trailer!

motorbike with 10m trailer of wood

the driver never went over 60kmh, which i suspect was because thats where the speedo got stuck – it certainly seemed much faster!

i was astonished by the enormous sizes of the loads everything carried, small motorbikes were often hooked up to large steel trailers up to 10m in length loaded with what looked like tonnes of timber, minivans with their interior compltely filled with firewood and then two long poles hanging out the back so anther tonne of wood could be staked and tied outside the back of the minivan.

i realised after a while that the reason the loads could be so enormous was that that cambodia is basically absolutely flat, so nothing ever has to go up a hill, or try to control speed going down one!

the boat trip was a welcome relief after the car, there were only 3 other passengers, 3 law students from sydney, these girls were living for 3 months in Phnom Penh. so the six of us enjoyed a slow and leisurely trip down the river, we had a yummy vegetable curry lunch before stopping at a silk weaving village which was actually quite interesting, the village also had a buddhist temple with 2 large prawn statues guarding the gates – and i thought only australia did the big statues of animals we eat thing!

dinner was satays and salad on the top deck of the boat as we slowly motored into Phnom Penh.

kai on the top deck

kai on the bow

click on the ‘i’ in the top left corner to see image descriptions.