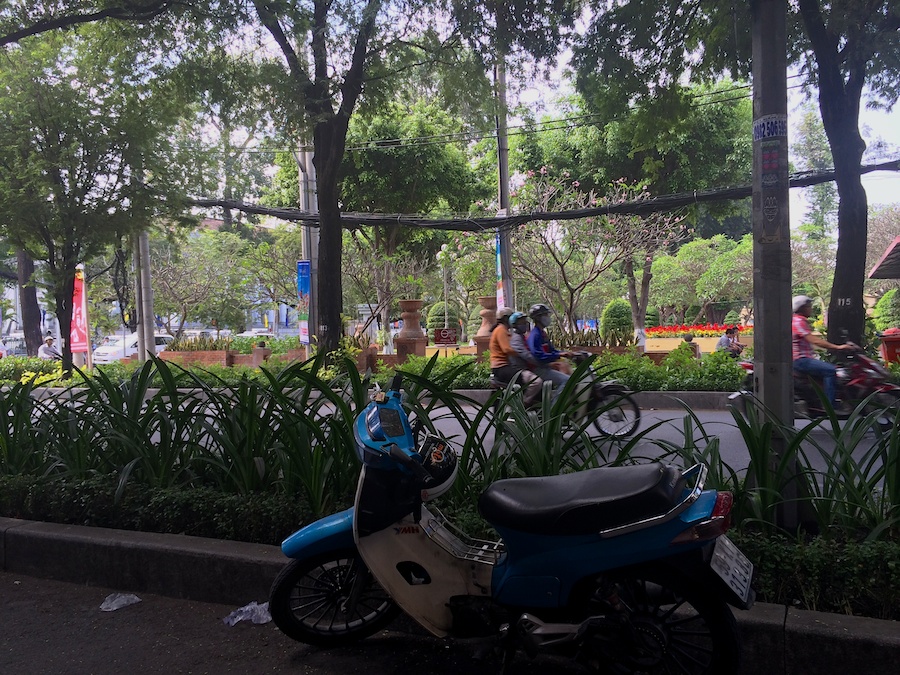 thats the view from the steps of the thuc cafe, where i have just enjoyed an espresso on the way home from breakfast, its typical of the heart of this vibrant place, wide footpaths, tree lined streets, small parks, with all the buzz of an international city.

the longer we spend here, the more convinced we are to come back and live here for an extended time – like 6 months, it was always our loose plan to spend our retirement living somewhere overseas for 6 months and somewhere in australia for the other 6 months – saigon is the first place in our recent travels where I am really certain I wish to come back to and spend time actually living here.

breakfast today was at the i.d. Cafe, the first time we visited we sat downstairs where they have their coffee machine and a couple of little tables, and enjoyed an espresso, it wasnt until I asked where the toilet was and they directed me upstairs, that we discovered they have a large upstairs space with a small restaurant, funky decorations and a view out over the local streets.

so today sal & I went back for a leisurely breakfast, sal had an omelette with baguette and i had char grilled pork with vermicelli noodles, bean sprouts, peanuts, thai basil, coriander and a typical vietnamese dressing. with a couple of short macchiatos the bill came to about $12 – which is not cheap in saigon but it was yummy and is at least half what a similar meal in a trendy cafe would cost in sydney.

view from the window.

i read about this little stall in an alley on a website devoted to saigon streetfood, its rumoured to have the best gà nướng or BBQ chook with broken rice. we taxied out there tonite to give it a shot, its not easy to find and a fair way from our hotel. the couple that run it have a few little tables lining the alley and a big char grill at one end to bbq the chook and pork on.

its a pretty crazy scene, they are absolutely flat out and as the food is cooked at one end of the alley and plated up to be served at the other end, the staff are sprinting from one end of the alley to the other, balancing plates of gà nướng and the couple of other dishes they cook here – all the time dodging the motorbikes that are still using the narrow, table lined alley!

the food lived up to its reputation, succulent and tender chook bbq’d in a scrumptious marinade, on a bed of ‘broken’ rice, a few pickles, some tomato and cucumber slices and a side dish of fresh chilli sauce. all for about $1.75 each!

they also do a side dish called cha, a steamed loaf of ground pork, mushroom, crab and other “secret” ingredients, but the language barrier meant we ended up missing out this time!

the taxis cost $10 to get us there and back – so about double the price of dinner for 3! if we were staying longer I would definitely get a motor bike for running round like this. Still compared to just about anywhere else, $15 all up for a meal for 3 and transport is still pretty damn cheap!

motorbike in the restaurant! 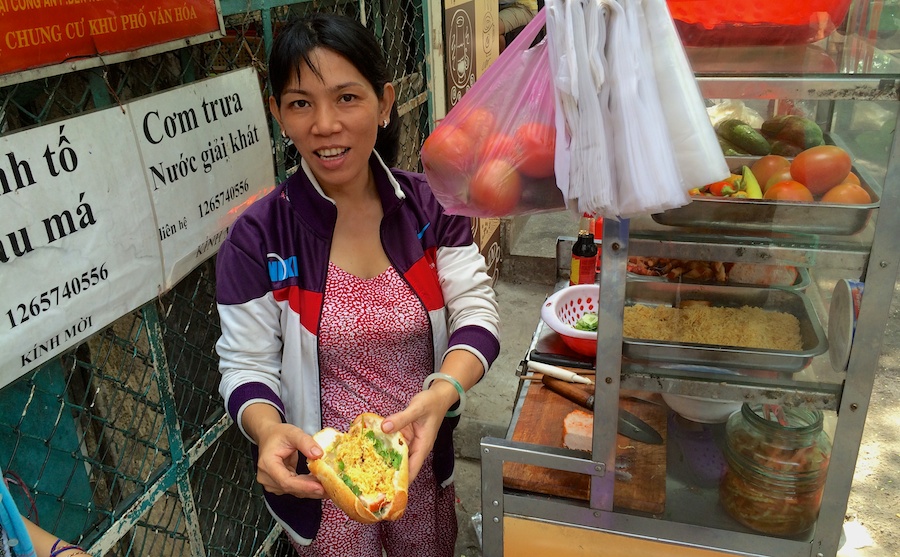 Luckily you can usually find a street cart selling bánh mì right next to a cafe serving a great coffee so you could probably live on a diet of bánh mì and coffee indefinitely!

espresso on a stool

Faema E61 from the business end!

sal and i had a bánh mì and coffee to try to dispel the foggy head and lethargy that undoubtably had plenty to do with the excesses of last night, sal headed home but i decided to wander down town to the restaurant where we dined last night to pick up the jumper i had left there due to my early onset dementia.

as i was strolling along the shady boulevards of saigon i was assailed by a number of dodgy looking old men on motorbikes, slowing down so they could offer me ‘special massage with nice girl’, i suspect what they were offering was neither special nor a massage – and probably not a nice girl either!

it did occour to me they were missing their mark, had they offered me “special bánh mì or phở” – I probably would have taken them up on their kind offer and jumped on the back of their honda.

instead i gently declined their offer of “special massage” and continued my meanderings through the shady streets.

the longer we spend in this city the more I enjoy it, certainly somewhere I want to come back and live for a few months, its got a lovely feel to it, very friendly, and as i said earlier, the wide boulevards, lots of big trees, wide footpaths and very clean streets make it stand out.

yesterday we caught up with Alex Vu, our mutual friend, peter phipps is an old garma festival mate of mine and he hooked us up with alex when we told peter we were coming to saigon.

alex came over to our apartment and invited us back to his house to see a traditional vietnamese family home, he offered to take kai over on his motorbike while sal and i caught a taxi – as you can imagine kai took to that idea like a rat up a drainpipe! 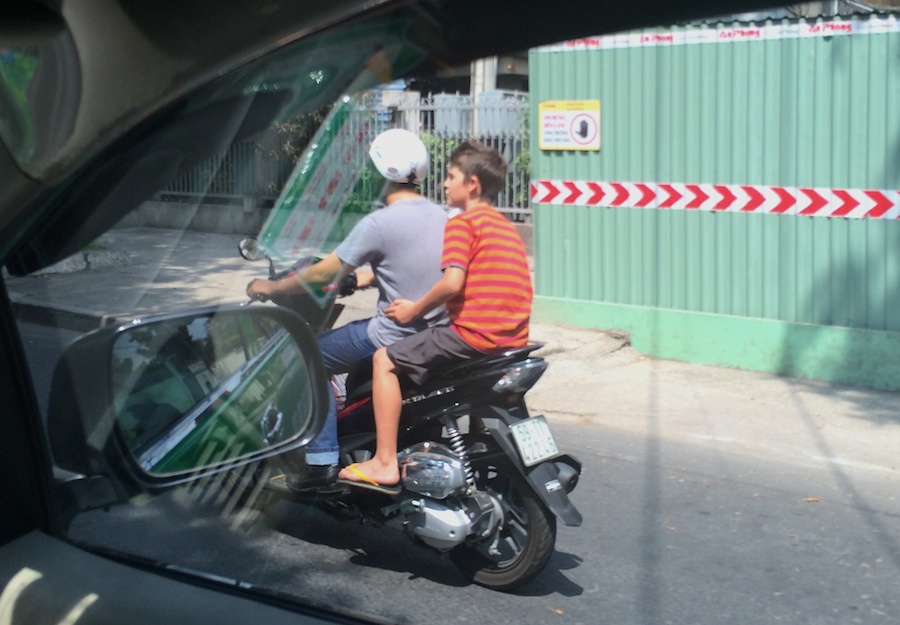 we spent a very enjoyable afternoon at alex’s house enjoying his hospitality, his parents and the rest of the family are away up north for the tet holiday so he was home alone, the house is 4 stories high, on a small footprint. after a tour of the house we settled down to beers, rice wine and lots of nibblies! 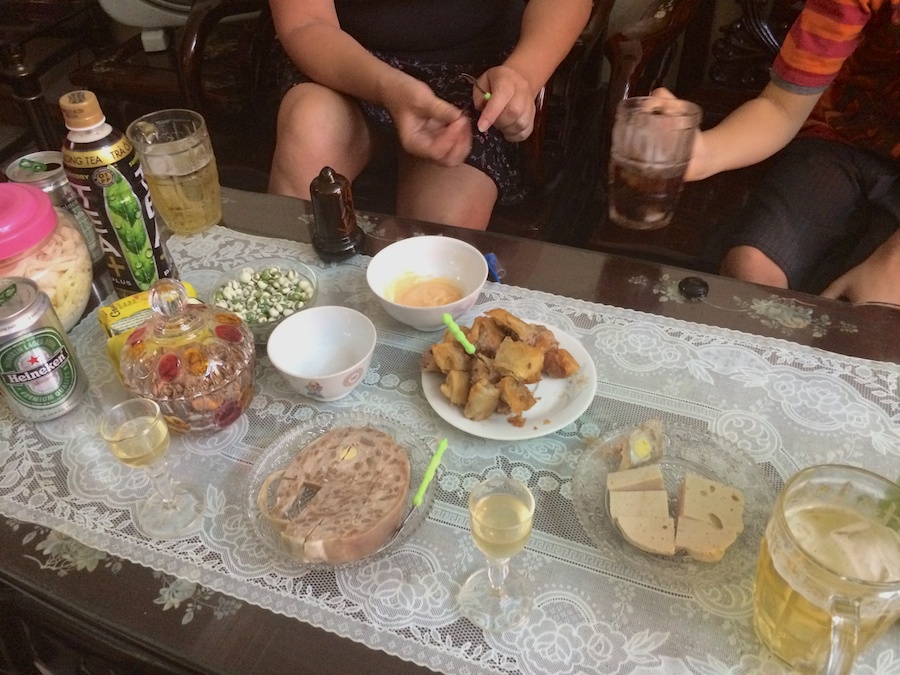 we walked home after a couple of hours with alex with a plan to catch up for dinner with another of his friends later on, that gave us time for a nanna nap and sober up before heading out on the town!

alex and his friend minh arrived and we headed out to the bbq garden restaurant for a slap up meal, we started off with a 3 litre ‘jug’ of beer which seemed like the perfect solution to a problem we didnt even know about!

the table has a bbq in the middle of the table and you simply order dishes off the menu and then cook them on the plate, we had goat, beef in betel leaf, prawns, squid, vegies and probably more i have forgotten!

we then came back up near our apartment where there are lots of little japanese bars and enjoyed a bottle of warm sake, tuna sashimi and sushi, alex and minh then took us to the havana club to finish the night off – well sort of, after that we did end up back at the apartment having a few beers and a drunken rave!

All in all a wonderful night, with great company, yummy food and a big hangover on the way!

cooking up a storm on the table BBQ

we awoke a bit doughy this morning after a bottle of vietnamese red and too many beers playing poker last night! we did have a very comfortable sleep on board the good ship Le Conchinchine 3, and the crepes, fresh fruit and strong black coffee got us going pretty quickly. It was a lovely calm misty morning on the mekong river and we headed off in a smaller boat to explore the floating markets of Cai Be as well as visiting villagers using traditional methods to make rice paper for spring rolls and puffed rice for cereals and munchy treats. I have added a couple of short videos to show these traditional skills and you can watch them below.

we also visited a beautiful traditional wooden vietnamese house that is nearly 200 years old and operates as a home stay now. we enjoyed a fruit platter and pot of tea in the gardens after wandering through the house and admiring not just the construction but the beautiful antique furniture,

Lotus flower in the garden of the house.

both the rice paper and puffed rice are made using a fire made from the rice husks, we saw the same fuel used in the brick kilns, and the ash after the husks are burnt is used as fertiliser so there is very little wasted in the production chain of rice!

the rice paper sheets are made with a form of rice milk that you can see in the tub beside the woman, the puffed rice is mixed with river sand in a large wok – the sand has become black from the burning husks and is continuously reused.

so it was goodbye to Le Conchinchine 3 and her wonderful crew, and our guide Kiet, and off in our car to Ho Chi Minh City, we arrived early in the afternoon and have settled into our apartment in down town Saigon, on first appearances its a beautiful city, wide boulevards, unusally wide and flat footpaths for this part of the world and lots of trees and old buildings. 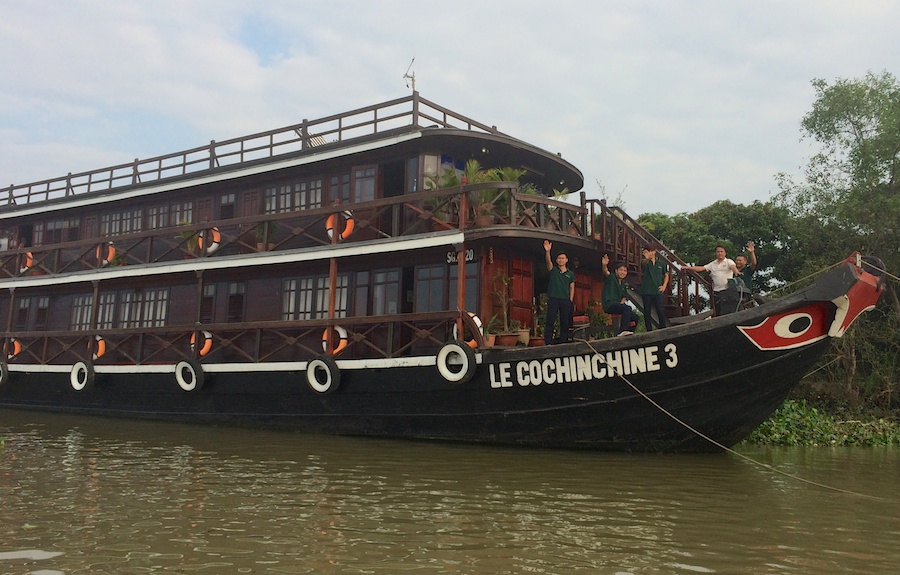 we ducked out for our first meal – a bowl of Pho, luckily we found a little street food stall that was open – as much of Saigon is closed for the Tet holiday, and for the princley sum of about $4 we had a bowl of Pho each and Kai had a plate of chicken and rice. I think we are going to enjoy our few days here! 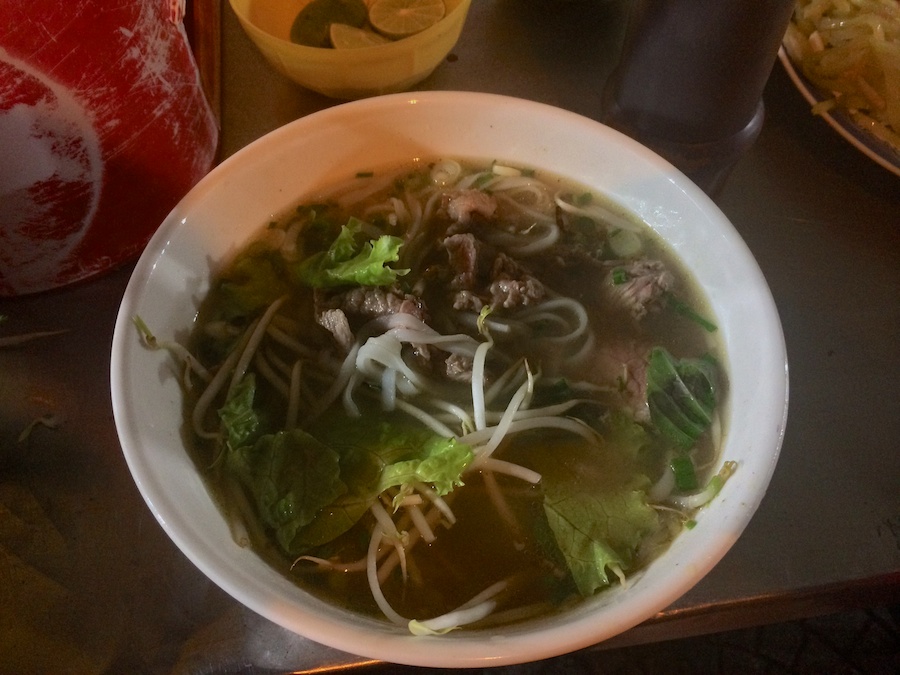