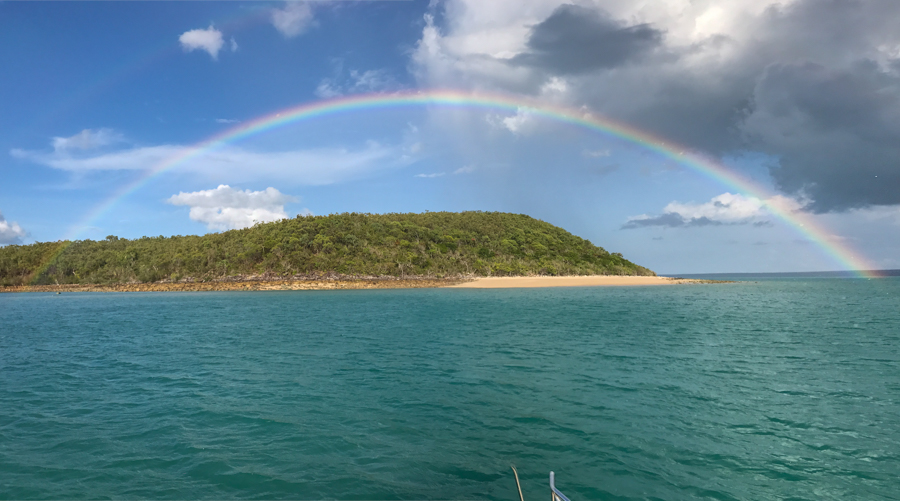 we headed up to inglis island for a few days exploring on friday morning, we took the big boat and towed the tinny for exploring and fishing. inglis island is the western most of the english company islands and is separated from the mainland by a narrow strait, nalwarung strait.

we steamed up against a bit of NE swell and a fresh ENE breeze, but once we rounded cape wilberforce it flattened off as we motored down malay roads. i decided to anchor in behind bosenquet islet which lies off the NE corner of inglis island.

“Matthew Flinders on 19 February 1803 named the island. It is believed to have been named after Samuel Bosanquet of Forest House, Waltham and Dingestow Court, Monmouthshire.

Flinders named a number of islands in the group after members of the East India Company (Cotton, Inglis, Wigram, Bosanquet and Astell) and his journal has the entry :

” I have therefore applied names to each [island], mostly after gentlemen in the East-India directory; and in compliment to that respectable body of men, whose liberal attention to this voyage was useful to us and honourable to them, the whole cluster is named the ENGLISH COMPANY’S ISLANDS”

Samuel Bosanquet was governor of the Bank of England (1792)” 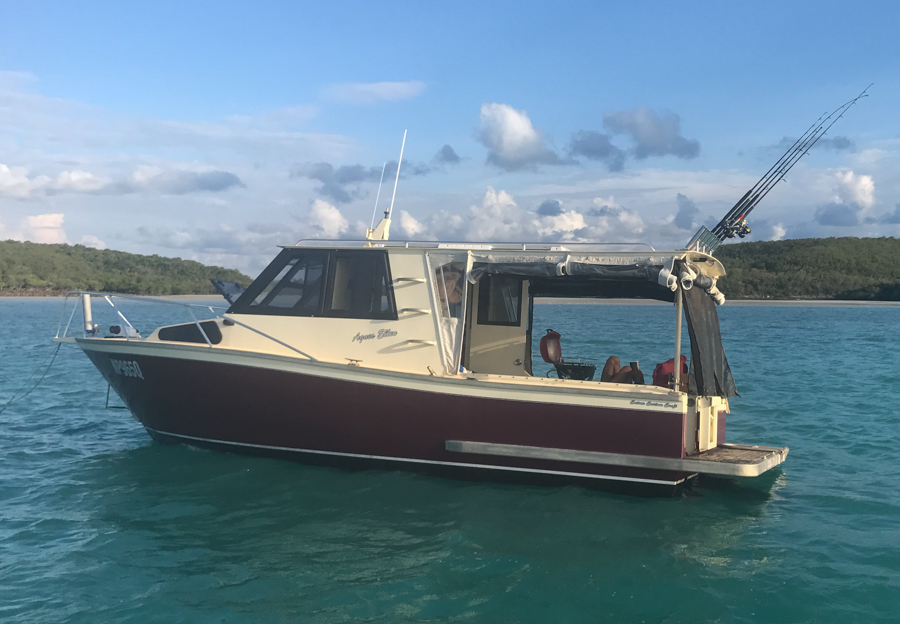 while it was a pretty anchorage, and had deep water close in, and shelter from the ENE wind, the swell rolled around the point of the island and we had a farily uncomfortable night!

friday afternoon we fished the creeks at the eastern end of inglis island – which are reputed to hold good numbers of blue salmon, threadfin, jacks and barra – but over the 3 days we caught nothing and saw no signs of action so whether the tides were wrong or i was holding my tongue wrong i dont know, but the fishing was very lean.

saturday we explored the northern side of inglis island and found some nice beaches, but again the fishing was dire, we had hoped to bottom fish the change of the tide, but by then the wind was too strong so we gave in and returned to the big boat.

dinner that night was accompanied by a bottle of veuve clicquot in honor of our 14th wedding anniversary! we enjoyed fresh bbq’d trevally fillets – thanks to kai who was the only successful fisherperson, having a ball chasing the trevally on light gear – he fished until after dark! 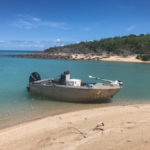 on the beach at inglis island 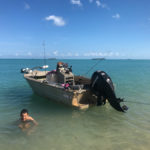 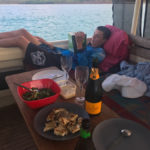 the nights were stunning, with a sliver of a moon that set early, the stars were magnificent and the luminescence in the water was electric.

on saturday afternoon we had a shower of rain and an amazing rainbow, at first we could see one end of it about 500m away in nalwarung strait, and then it completed the arc and the other end went into the water about 100m away from where we were anchored! so we had pots of gold within reach either side!! 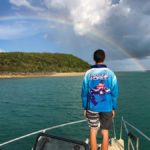 the start of the rainbow 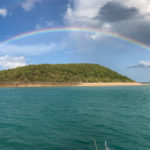 we had a few minor problems, as sems to be the way with boats! the regulator for the gas stove had frozen closed and i was unable to free it, so we had to use the weber baby Q to do all the cooking – fine for the bbq fish, but less than ideal for the morning coffees! i also had a recurrence of a fuel supply problem that had become apparent on our last trip, it causes the motor to suddenly lose power which is a bit disconcerting.

after some investigation today i believe i found the cause, the breather hose on the tank had a big dip in it, below the tank, this allowed it to fill with diesel when the tank was filled and it was causing a vacum lock. hopefully re-routing the hose has fixed it, but we wont know for sure until the next trip.

all in all, a lovely 3 days relaxing with just sal, kai and i and no connection to the rest of the world! very peaceful. just would have been nice to find a few more fish, but there is always next time! 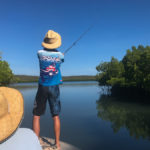 kai flicking in the creek 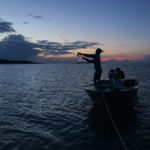 we covered 93nm in the big boat and did 7.8hrs engine hours all up, used 220lt so 28 l/h and 2.36 l/nm. it was also our first time with sal and i towing out both boats and launching and retrieving them on our own, so that was a nice confidence booster too.